What 100 Social Media Followers Are Really Worth
981
post-template-default,single,single-post,postid-981,single-format-standard,wp-custom-logo,theme-bridge,woocommerce-no-js,ajax_fade,page_not_loaded,,qode-title-hidden,qode_grid_1300,qode-content-sidebar-responsive,columns-4,qode-theme-ver-16.9,qode-theme-bridge,wpb-js-composer js-comp-ver-6.4.1,vc_responsive

19 Jul What Social Media Followers Are Really Worth

Posted at 22:10h in social media by ahmadmin
0 Likes

A fascinating blog from Neil Patel with some interesting social media findings!

The social web is huge. From Facebook to Pinterest, they all command billions of eyeballs per year.

Which, of course, makes these channels too big to ignore. In other words, you have no choice but to participate in them or else you’ll miss out on traffic and revenue.

But, how much time and money should you devote to each social network?

Which ones produce the best ROI?

How much are 100 social media followers really worth?

Each company has been participating in all these social networks for at least 3 years and they have at least 100 social media followers on each platform.

Now before we dive into the data, keep in mind all of the stats are broken down based on 100 social followers.

And for the purpose of this blog post, we will focus only on organic social media traffic.

So, let’s dive into what we learned:

Compared to when each social network originally came out, it’s become much harder to generate organic traffic from each of them.

You can still generate organic visits, but of course, reach has died down. But how much has it died down? 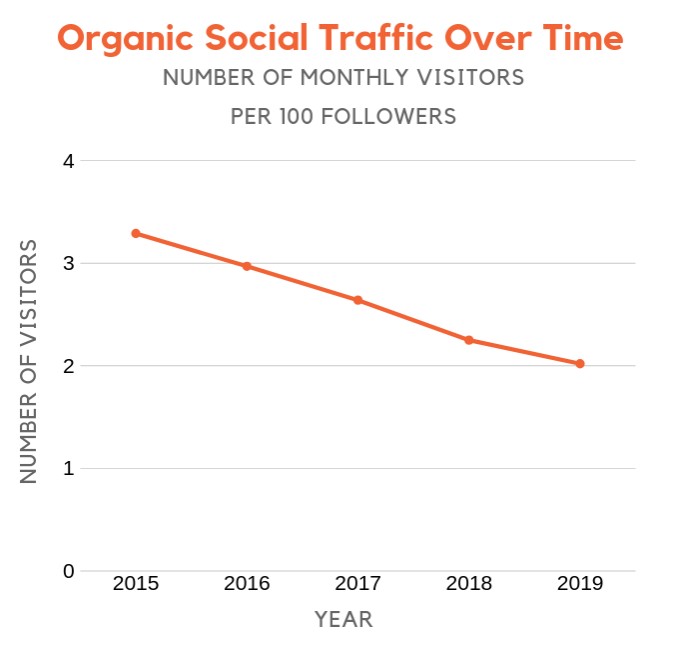 As you can see, it has drastically decreased.

In 2015, you could generate a bit more than 3 visitors a month from the social web for every 100 followers you had, and now it’s dropped down to roughly 2 visitors per month.

I know that data isn’t shocking, but think of it this way, that’s a 38.6% drop in organic social media traffic. And based on the chart, there are no signs of recovery.

But what about traffic by social network?

Sure, organic social media traffic might be dying as each network wants you to advertise, but which networks drive the most traffic per 100 followers?

If you had to take a guess, which one do you think it would be? 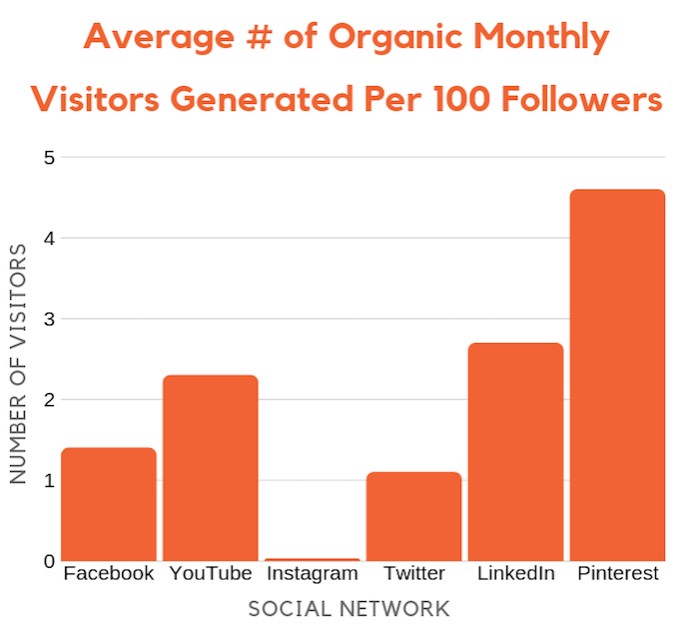 Instagram isn’t much of a shocker, though, as you can only drive traffic through bio links and asking people to swipe up in stories.

Here’s the thing to note about YouTube… although it drives a decent amount of visitors per 100 subscribers, most people using YouTube don’t experience much (if any) traffic because they don’t link out to their site within their videos.

The first chart shows that organic social traffic is slowly dying down, but how about if you increase your posting frequency?

That should increase your organic social media traffic, right?

In general, posting more often does lead to more traffic. But after 8 monthly posts on each social network, the data shows you’ll see diminishing returns.

Why you may ask?

The way most social media algorithms work is that the more people engage with your content, the more of them will see your content as you post it.

So, your goal should be to only post content people love and want to engage with. The moment you start posting mediocre content, it hurts your overall traffic numbers because that means fewer people in the future will see your new content no matter how amazing it is.

Speaking of engagement, which social networks tend to have the most engaged users?

I was shocked by the engagement stats because I assumed that Pinterest would have won in this battle as they are driving the most traffic per 100 followers to websites.

But I was wrong. 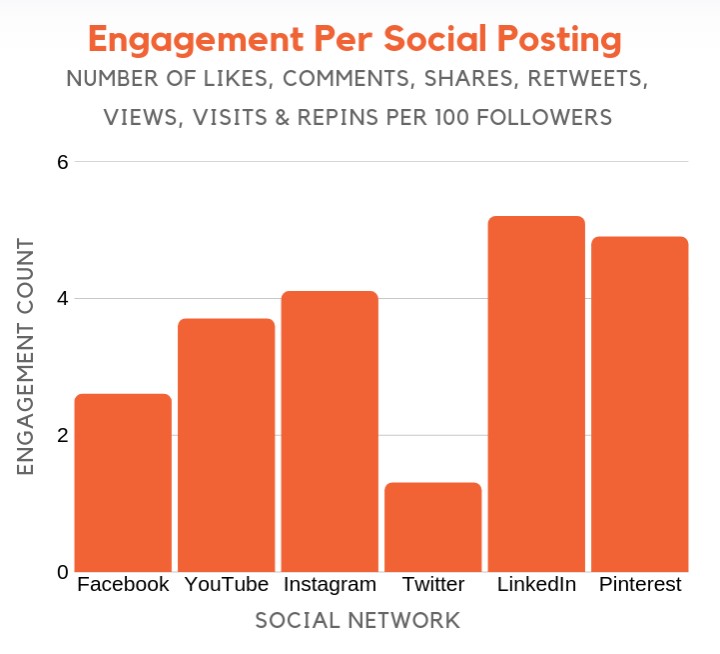 Instagram also did extremely well, which I wasn’t shocked by as most of the people I know who use it do so as a “personal” social network instead of leveraging it for work.

That’s why the engagement is so high on Instagram.

One thing to note is that posts not containing a link, such as images or videos, tend to get the most engagement.

This is also because social sites tend to promote content that keeps people on their social sites as opposed to driving their visitors off to your site.

If you aren’t producing videos, you should definitely consider starting. Even though videos don’t rank well on Google, they are the future.

With video, there are 2 main types of videos… one that you just upload and ones that are live.

Let’s see how the different video types stack up against each other. 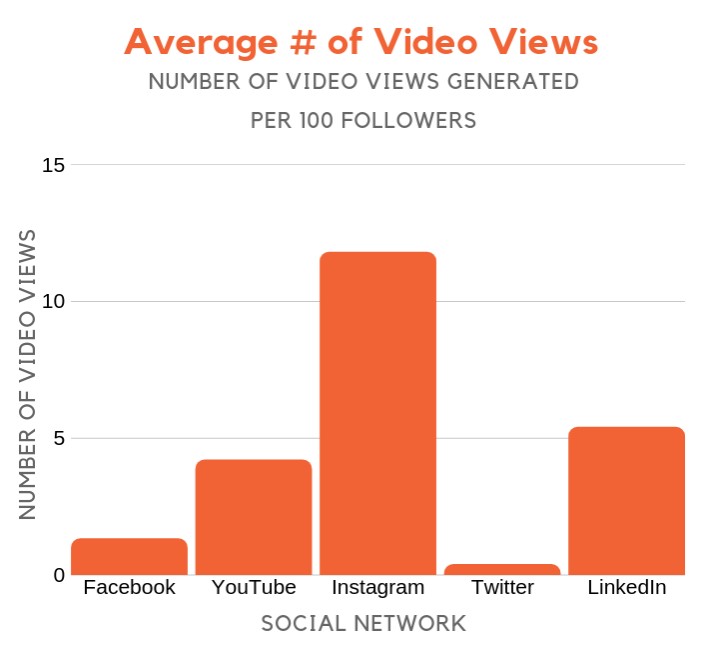 When you look at the chart above, it’s easy to say that Instagram produces the best results for videos. Then come LinkedIn and YouTube.

But there is something that you have to keep in mind… Instagram auto-plays videos while YouTube is much pickier about what they count as a “video view.”

None-the-less, if you’re going to create video content, you should post it on all of the social networks out there, but I would first focus the majority of your efforts on Instagram, LinkedIn, and YouTube.

YouTube won’t provide amazing numbers in the first 24 hours of uploading a video, but through YouTube SEO, you can continually get views while you won’t see that happen on any of the other social networks. 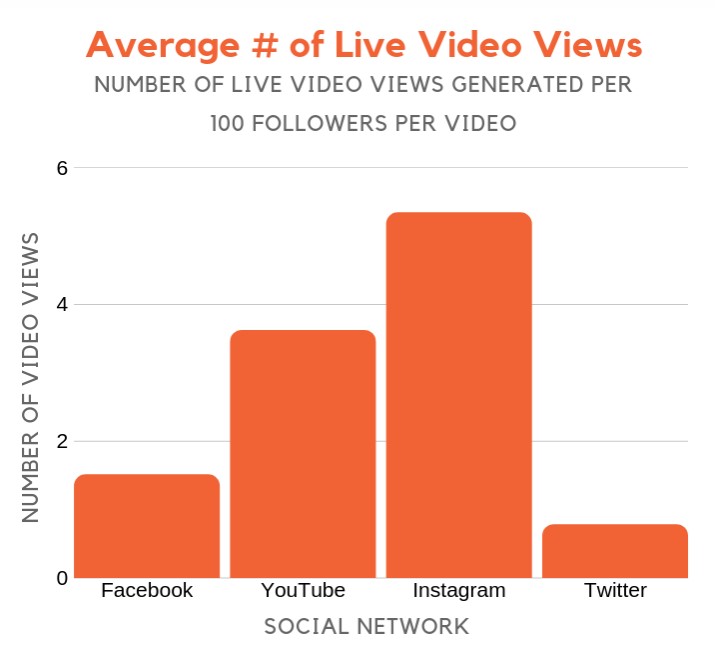 But what is interesting is that live videos don’t generate as many viewers as just posting and scheduling them.

When we dug into why the main reason wasn’t that social sites don’t want live content, it’s that with non-live videos, businesses spend more time leveraging keyword research and optimizing their videos for the maximum amount of views.

While on the flip side it is a bit harder to do that with live videos.

If you want to get the most views from your videos, use tools like Ubersuggest to see what keywords are popular.

Putting keywords in your title and descriptions isn’t enough, though. Social media sites are able to decipher the sound to see what your video is really about.

Now let’s get into the best part… conversions and sales.

Have you heard the saying, the money is in the list?

If you aren’t collecting emails, you should start right away. Because once you have an email list, you can always market to people on your list and convince them to buy your products or services. 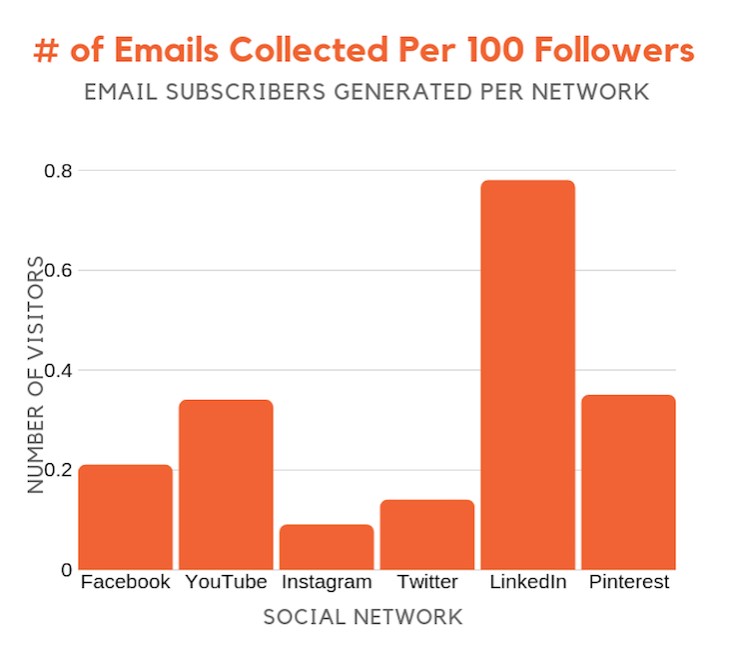 LinkedIn has the best conversion rates from a visitor to an email subscriber. Pinterest and YouTube also perform really well.

You may think that most of the people on LinkedIn only care about B2B but that is wrong. Remember everyone on LinkedIn is also a consumer. They buy everyday products just like you and me.

What was interesting with the email collection numbers is that the majority of your social media followers won’t ever convert into email subscribers. But as you share and post content on the social web, the followers of your followers may also see your content, which then increases the likelihood of getting more traffic and email subscribers.

Whether you love or hate social sites, they do drive revenue. And no you don’t have to spend money on ads to generate revenue.

Ads do help, of course, but here is the percentage of revenue that each business generated from organic social media traffic. 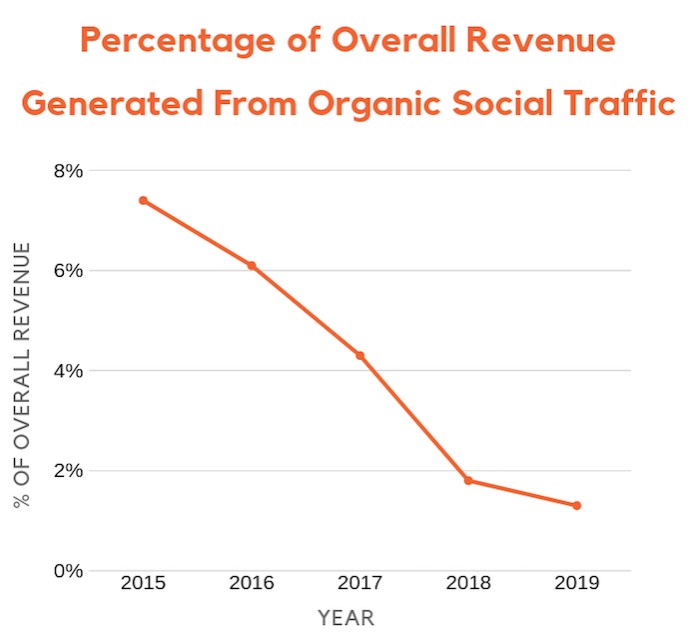 It’s been declining over the years, but the numbers are starting to flatten out.

The decline isn’t just related to social media algorithms becoming tougher, though. It’s that businesses are also diversifying their marketing approach. They are taking an omnichannel approach which means they leverage more channels. Because of that, each one also makes up a smaller portion of their revenue.

Social media is still strong and kicking. You may only be able to generate 2 visitors a month for every 100 followers you have, but that scales as you grow your social following on every network.

Plus, the brand effect you can get by doing things like uploading videos will also help significantly.

Now before we wrap things up, I thought it would be interesting to see what percentage of social media traffic is generated from organic efforts versus paid: 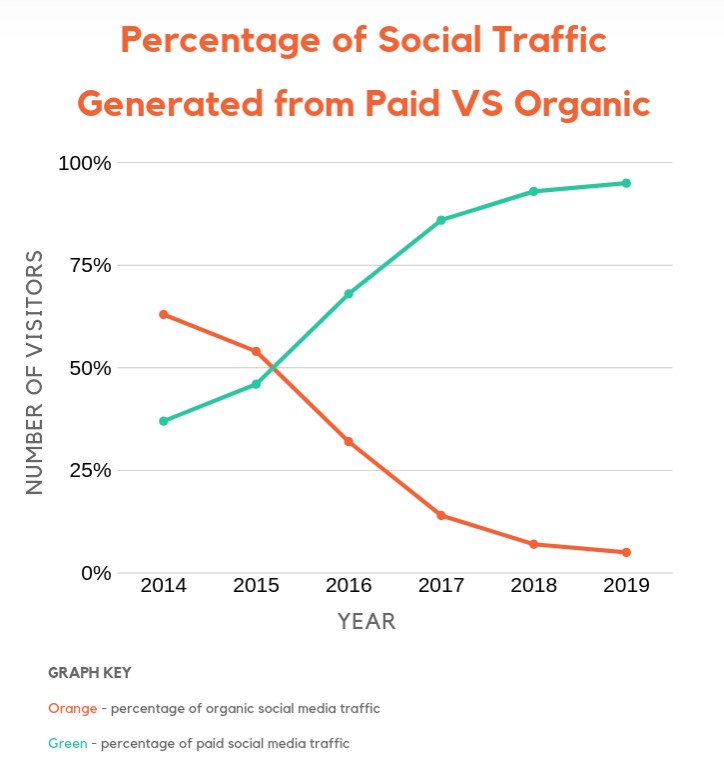 None-the-less, don’t be discouraged by your social media traffic dwindling down.

If you get a bit creative and follow this, you can spike your numbers.

So, what are your social followers worth to you?

Original article can be found here.